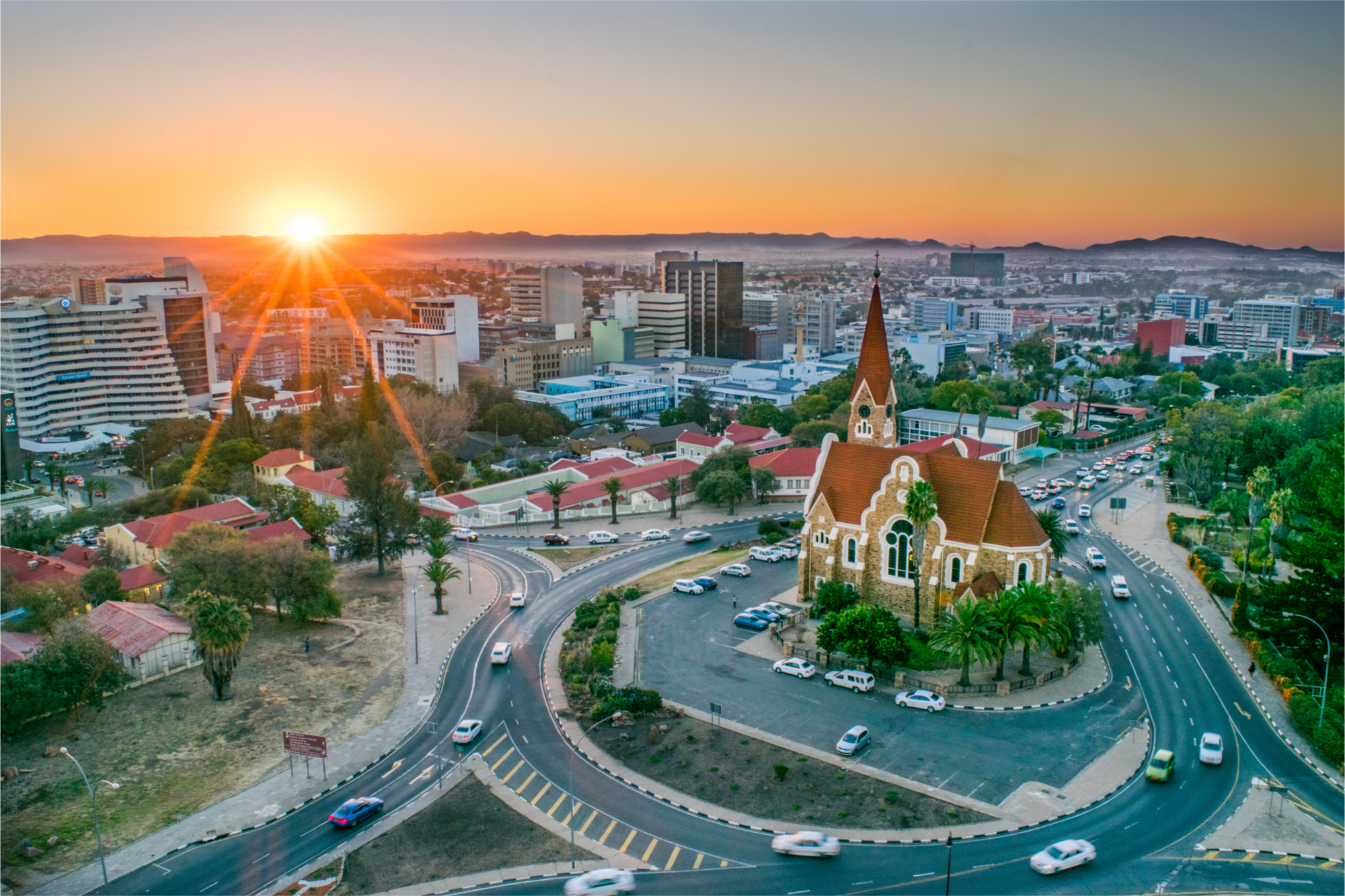 Namibia is in southern Africa and borders the Atlantic Ocean to west, Angola and Zambia to the north, Botswana to the east, and South Africa to the south and east. Namibia gained independence on March 21, 1990 after the Namibian War for Independence ended. Windhoek is the largest city. The country belongs to the U.N. the Southern African Development Community (SADC), the Commonwealth of Nations, and the African Union.

Namibia is a stable multi-party parliamentary democracy and has a population of around 2,625,606 world population review (2018). The economy is mainly tourism, agriculture, herding, and mining. Namibia has the second lowest population density in the world. About a third of the country’s people live below the poverty line and 13.3 percent of adults are infected with HIV.

The country’s name comes from the Namib Desert, which is considered to be the oldest desert in the world. Prior to independence in 1990, the colony was known as German South-West Africa and South-West Africa.

Bushmen, Damara, and Namaqua inhabited the area since the 14th century AD as part of the Bantu expansion. The first Europeans to explore the area were Portuguese, but they did not claim it for Portugal.

Dorsland trekkers in the 19th century crossed Namibia while in transit from Transvaal to Angola. The area was not explored by Europeans until the 1800s when German and Swedish traders arrived.

In 1884, Namibia became a German colony known as German South-West Africa. The Herero and Namaqua fought against the Germans from 1904 to 1907. In the subsequent genocide, 10,000 Nama and 65,000 Hereros were killed and survivors were deported or used for forced labor. This genocide remains relevant to their ethnic identity to this day.

During World War I, South Africa occupied the area and wanted to incorporate it into its territory, this incorporation did not occur. In 1946, South Africa refused to replace the earlier mandate with a U.N. Trusteeship agreement. As European colonies were given independence in the 1960s, South Africa faced pressure to do so with Namibia. The U.N. revoked South Africa’s mandate in 1966.

The military wing of the South-West Africa People’s Organization (SWAPO), known as the People’s Liberation Army of Namibia, began a fight for independence. South Africa did not end its occupation until 1988. During South Africa’s rule, white farmers, who were only .2 percent of the population, owned 74 percent of the arable land. The country officially claimed full independence in 1990. Sam Nujoma became the first president. After the end of apartheid in 1994, Walvis Bay was returned to Namibia.

Namibia has since transitioned to become a parliamentary democracy with multiple parties. There are several parties represented in the National Assembly, but the Swapo Party has controlled it after every election. In 2005, there was a smooth transition from Nujoma’s 15 year rule to Hifikepunye Pohamba.

The government has granted amnesty to those who fought on either side during the liberation war.

Namibia is a presidential representative democratic republic with the president elected to five year term. The president is the head of government and head of state. Legislative power belongs to both the government and the parliament, which is bicameral. Hifikepunye Pohamba was elected president in November 2004 in a landslide victory replacing Sam Nujoma who led the country during its first 14 years of self rule. Pohamba was reelected in November 2009 – 2014.

Namibia’s foreign policy is independent, with a principal concern of developing relations with South Africa and the surrounding region.

Namibia is the 34th largest country and has an area of 824,292 sq. km. It is also the second least densely populated nation.

The country has 13 administrative regions which are divided into 107 constituencies. Regional councilors are elected by secret ballot.

Five geographical areas exist in Namibia, which is the Central Plateau, the Namib Desert, the Great Escarpment, the Bushveld, and the Kalahari Desert.

The Central Plateau runs from north to south and is where Namibia’s highest point, Konigsein, is located (2,606 meters). The region is also home to most of the country’s population and the capital, Windhoek.

Stretching along the entire coastline, the Namib Desert is an expanse of dunes and gravel plains. The area contains some of the world’s largest sand dunes. There is little vegetation in the Namib.

The Great Escarpment rises to over 2,000 meters and temperatures increase as one moves further inland. Despite its rocky soils, the area is more productive than the Namib. There is rainfall which creates micro-habitats and the vegetation is varied.

The Bushveld is on the Angolan border and receives more rainfall than other parts of the country. Temperatures are also more moderate. The flat, sandy soils do not retain water well. The Etosha Pan is in north-central Namibia, this is a dry saline wasteland most of the year. In the rainy season, a shallow lake 6,000 sq. km. forms. This is important to the wildlife in the surrounding savannahs because drought in other areas forces them to watering holes around the pan.

The Kalahari Desert is shared with South Africa and Botswana and is a well-known geographical feature. While there is arid, sandy land, other areas do not meet the common definition of a desert. The Succulent Karoo is home to more than 5,000 plants, one-third of the world’s succulents are located in the Karoo.

The stable rainfall may be the reason for the high endemism of these succulents. There are no regular droughts in the Karoo, so despite technically being a desert, there is enough winter moisture to support the plant life.

The Coastal Desert is one of the world’s oldest and its sand dunes are some of the highest as well.

These deserts are one of the richest diamond sources. The area is divided into the southern Diamond Coast and the northern Skeleton Coast. Due to the shoreline, dense fog is common.While there is arid, sandy land, other areas do not meet the common definition of a desert.

The succulent Karoo is home to more than 5,000 plants. one third of the worlds succulents are located in the Karoo.

The stable rainfall may be the reason for the high endemism of these succulents. There are no regular droughts in the Karoo, so despite technically being a desert, there is enough winter moisture to support the plant life.

Namibia is in the southern tropics and the Tropic of Capricorn divides the country. There are more than 300 days of sunshine per year. The winter between June and August is generally dry. The two rainy seasons are in the summer. The humidity is low and rainfall is variable leading to common droughts. Cold northerly Atlantic currents account for the low participation and dense fog.

Most Namibians are black African, the Herero, Himba, and Ovambo are major ethnic groups.

6 percent of the people are whites of French, British, German, Dutch, and Portuguese descent. This is the second largest population of those of European ancestry in sub-Saharan Africa. The white population here share similar cultures to the white population in South Africa.

Both public and private healthcare systems operate in Namibia, with major differences in the quality of service provided. While the private facilities are well staffed and live up to Western standards, public hospitals are often understaffed and do not always offer all services, such as dialysis and organ transplants. The private hospitals in the capital are especially good and include the Mediclinic Windhoek.

To be admitted to most private hospitals in Namibia, you will either need to pay upfront, even if you have insurance, or provide a letter of guarantee from your health insurance provider, stating the maximum benefits available to you.

South Africa and Namibia have closely tied economies, the Namibian dollar pegged one-to-one to the South African rand. Namibia receives 30%-40% of its revenues from the Southern African Customs Union (SACU). Mining accounts for 11.5% of GDP, but provides more than 50% of foreign exchange earnings. The country is the fourth largest uranium producer and the fourth largest exporter of non-fuel minerals in Africa. Alluvial diamond deposits make the country a main source for gem quality diamonds. Marine diamond mining is becoming increasingly important as the terrestrial diamond supply has dwindled.

Challenges to poverty reduction include slowing economic growth; adverse weather patterns, high inequality, and high unemployment. Typically, female headed households, the less educated, larger families, children and the elderly, and laborers in subsistence farming, are particularly prone to poverty. The poverty rate, based on the international $1.90 (PPP terms) poverty line, was projected to increase marginally to 15.4% in 2018 and stagnate to 15.5% in 2019 and 2020.

Namibia wants to become a regional transportation hub and has an important seaport to its landlocked neighbors. The country also has airports, highways, and railways.

Namibia still imports some of its food despite half the population depending on agriculture for its livelihood. Despite a per capita GDP higher than Africa’s poorest countries, most Namibians live in rural areas and live on a subsistence level. Namibia’s level of income inequality is one of the highest in the world.

Thermal and hydroelectric power plants generate most of Namibia’s power. Electricity is regulated by the Electricity Control Board.

Eco-tourism is important in Namibia and there are many reserves and lodges to accommodate these types of visitors. 14 percent of tourism consists of sport hunting. Visited areas include the Caprivi Strip, Fish River Canyon, the Skeleton Coast Park, Sossusvlei, Sesriem, Etosha Pan, and coastal towns like Walvis Bay and Luderitz.

Child labor exists in Namibia and reports state the country may be a destination and source for trafficked children. These children may be trafficked within Namibia for agricultural labor, vending, and cattle herding. The government and other stakeholders endorsed the Action Programme towards the Elimination of Child Labor. Despite this, the government has not made any prosecutions for child trafficking.

In order to integrate former opposing forces, Namibia created the Namibia Defence Force (NDF) which included former members of the People’s Liberation Army of Namibia and South West African Territorial Force. The British arranged the plan for integration of these forces and provided training.

From ages 6 to 16, education is free and compulsory. in In recent years an average of 8 percent of GDP was spent on education.

Namibia’s constitution specifically addresses the need for conservation. The government worked with outside agencies and government to form a Community Based Natural Resource Management (CBNRM) support structure. The goal is to promote resource management by giving wildlife management and tourism rights to local communities.

Football is the country’s most popular sport. The national team qualified for the Africa Cup of Nations in 2008; however it did not qualify for the 2014 World Cup. Rugby and cricket are also popular. Frankie Fredericks is a popular track and field athlete who won four Olympic silver medals.

MSF Called Out for Racist Policies

Addis Makes Key Arrests in the Murder of Ethiopian Activist