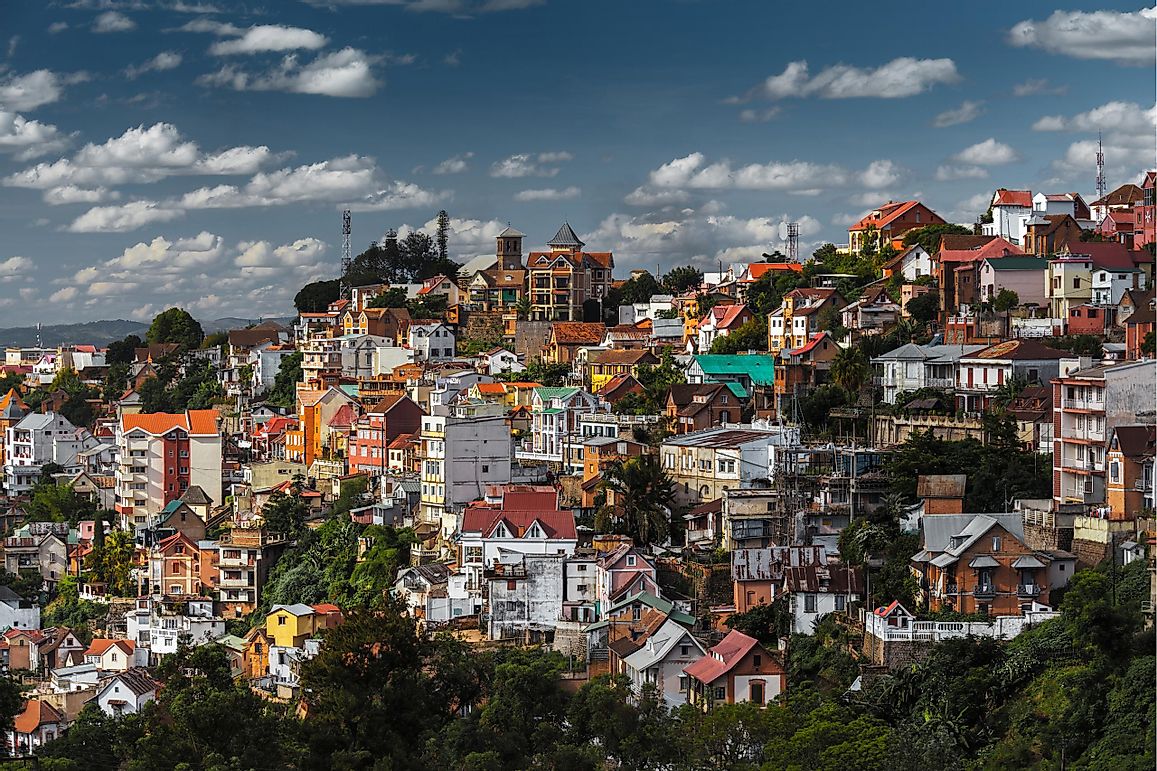 The Republic of Madagascar is an island nation off the southeast coast of Africa. Its main island is the fourth largest in the world.

Archaeologists estimate the island was first inhabited sometime before 200 AD by Austronesians from Borneo. Later, Bantu people migrated across the Mozambique Channel and mixed with the inhabitants. Arabs and East Africans arrived later. In the 19th century, Madagascar was ruled by the Merina kingdom. From 1890 to 1960, it was part of the French empire. In 1960, the country gained independence.

Most of the population speaks Malagasy, the local language. This official language is an Austronesian language. French has been official since independence and English became official in 2007. Christianity and Malagasy mythology are the main religions.

Five percent of the plant and animal species in the world are in the country. 80 percent are endemic to Madagascar.

Madagascar’s territory split from Africa as part of Gondwana 160 million years ago. Archaeologists believe the initial human settlers arrived from 200 to 500 AD. These were seafarers from southeast Asia. Shortly afterwards, Bantu settlers moved to the island across the Mozambique Channel.

Madagascar’s written history starts in the 7th century when East Africans and Arabs set up trading posts. The island’s kings extended their power through trade with neighbors during the Middle Ages. Several chiefdoms dominated the territory including the Menabe and Boina. The Sakalava also had extensive influence. The country is an important trading port and gave Africa a route on the Silk Road.

Madagascar’s trade wealth created a system of regional monarchs known as the Maroserana. These rulers expended their kingdoms and adopted their subject’s culture. The country was a contact point for other Swahili seaport cities.

In 1500, European contact began when Diogo Dias, a Portuguese sea captain, found the island when his ship became separated from a main fleet on the way India. A representative of the French east India Company, Francois Caron, sailed to Madagascar in 1666. They established ports but failed to set up a colony. The French established additional trading posts along the east coast in the 17th century.

Captain Misson and his crew founded a famous pirate enclave at Libertalia in Madagascar in the late 1600s. Pirates frequented the area of Madagascar mainly from 1774 to 1824.

Merina rulers established control over most of the islands beginning in the 1790s. In 1817, the British completed a treaty with the Merina ruler to abolish the slave trade. The British gave the island military and financial assistance in return. This led to increased British influence in the country.

With the Royal Navy’s dominance of the Indian Ocean and the slave trade’s end, the Sakalava lost power to the Merina. A royal edict was issued by Queen Ranavalona I forbidding Christianity. This led to an estimated 150,000 dead during her reign. Commercial activity with other nations halted and the islands grew more isolated. In 1883, the French invaded to restore property taken from French citizens in what was later known as the Franco-Hova War. When the war ended, Madagascar ceded northern coastal areas to the French. The British accepted the French protectorate in 1890.

A French force landed and marched to the capital in 1895. 20 French soldiers died fighting and 6,000 died of disease. After the fighting ended in 1896, the French annexed Madagascar. The royal family’s 103 year-old reign ended when they were exiled to Algeria.

Troops from Madagascar fought in Morocco, France, and Syria during World War II. When Germany defeated France, Madagascar was governed by the Vichy government. In 1942, British troops occupied Madagascar to keep the Japanese from seizing it.

An uprising broke out in 1947 against the French. Thousands were killed in the fighting, which led to reforms in 1956. Madagascar moved towards independence. On October 14 1958, the Malagasy Republic was proclaimed as an autonomous state. A constitution was adopted in 1959 and full independence was granted on June 26, 1960.

Power struggles have been a problem in Madagascar. After the country gained its independence, coups, disputed elections, and assassinations occurred.

In 1975, Didier Ratsiraka took power in a coup and ruled until 2001. He was ousted for a short period in the 1990s. In December 2001, Ratsiraka and Marc Ravalomanana both claimed victory. Ratsiraka’s supporters blockaded the capital. After eight-months of fighting, the High Constitutional Court pronounced Ravalomanana president after a recount. In July, Ratsiraka fled to France.

When the military withdrew its support for Ravalomanana, he resigned on March 17, 2009. He assigned his authority to a military council headed by Vice-Admiral Hyppolite Ramaroson. The military gave its support to Rajoelina who then declared himself the country’s new leader and Monja Roindefo was appointed Prime Minister.

A mediation process led by the Southern African Development Community (SADC), led to Madagascar holding UN-supported presidential and parliamentary elections in 2013.  Jean-Louis Robinson was defeated by former de facto finance minister Hery Rajaonarimampianina in a presidential runoff and he was inaugurated in January 2014. Most international observers noted some irregularities, however polls were declared to be a credible reflection of the Malagasy public’s will.

The country has six provinces, which are Antananarivo, Antsiranana, Fianarantsoa, Mahajanga, Toamasina, and Toliara. There are an additional 22 regions. These are subdivided into 116 districts and 1,548 communes.

Madagascar is the 46th largest country in the world at 587,041 sq. km. In the east, an escarpment leads from the Central Highlands down into a rain forest. A chain of lakes connected to canal is known as the Canal des Pangalanes. Descending from the central highlands to the west is more gradual. Many protected harbors are along the west coast. Erosion inland has made silting a major problem.

The central highlands have rice-growing valleys between barren hills. Red soil is exposed, which has led to the country being referred to as the “Red Island.” At 2,876 meters, Maromokotro is the highest peak and is found in the Tsaratanana Massif. There are two seasons, the dry from May to October, and the rainy from November to April.

The country’s isolation has led to a unique plant and animal mix. 90 percent of the 10,000 plants are found nowhere else. Human activity has endangered these plants and animals, resulting in a third of the native vegetation disappearing since the 1970s. In the 2000 years from human arrival, 90 percent of Madagascar’s forests have been lost. Most lemur varieties are endangered.

Deforestation has been extensive due to mining operations. Known as tavy, slash-and-burn activities have occurred in multiple areas of the country. This practice quickly leads to nutrient-poor soil.

Agriculture is a cornerstone of the country’s economy. Other major exports are coffee, vanilla, cloves, sugarcane, cocoa, rice casaba, bananas, beans, peanuts, and livestock products. Tourism was booming and focused on the country’s unique biodiversity, however many tourists are now wary of entering what is seen as an uncertain environment.

In the late 1980s, structural reforms began on the economy. After economic stagnation from 1991 to 1996, five years of economic growth and investment occurred. Poverty levels still remained high. Political conflict resulted in decreased economic activity in the first half of 2002. After the crisis passed in 2003, the economy bounced back and grew 10 percent. The government worked with various outside organizations and government to increase economic activity and infrastructure.

Growth was slow during 2010 to 2013 although expansion in mining and agricultural sectors is expected to contribute to more growth in 2014. International organizations and foreign donors are expected to resume development aid to Madagascar once Rajaonarimampianina appoints a new government.

Despite being a founder of the Organization of African Unity (OAU), Madagascar is seen as being outside the mainstream of African affairs. In 1997, President Ratsiraka adhered to market-oriented policies due to increasing globalization. Madagascar’s locations and past isolation have inhibited participation in regional organizations but particularly strong relationships were cultivated with the United States.

The African Union replaced the OAU in 2002. Madagascar was not allowed to attend its first summit due to the election dispute. In 2003, it rejoined the group. The 2009 crisis led the country to be suspended again. The British ended aid to Madagascar and closed its embassy in 2005 despite protest from African nations.

The year 2013 saw the re-opening of Britain’s Embassy in Madagascar after seven years, this marked Britain’s full diplomatic re-engagement with Madagascar after the decision by the last British Government to close the Embassy in 2005. This move will aid in a stronger trade and investment relationship between the UK and Madagascar. As of 2014 there is still no Madagascar embassy in the UK.

Mixed Austronesians are most of Madagascar’s population. DNA analysis has shown evidence the Malagasy people are mainly of half Austronesian and East African descent. Malagasy, the main language shares 90 percent of its basic vocabulary with the Ma’anyan language from southern Borneo.

36 separate tribes emerged after migration from Africa and the East Indies.

The French colonial administration began classifying people into ethnic groups. This continued after independence until after 1975. There are still ethnic divisions, which cause violence, but this does not occur as often as in past times.

Each woman in Madagascar has approximately 5 children. 16 physicians are available for every 100,000 people. Infant mortality is 45 per every 1,000 live births. Three-quarters of the population in the country lives below the poverty level.

In addition to the Malagasy language, French is also spoken among the educated. English is becoming more widely spoken. Malagasy and French were the original constitution’s official languages. In the 2007 constitution, Malagasy is still the national language. English was recognized to improve foreign investment.

Homes are more in the style of those in Southeast Asia rather than those in Eastern Africa. This style does vary from region to region.

Rice is common and is part of nearly every meal as it is in Asia.

Madagascar has a well-developed oral tradition. The Idonia is an epic poem handed down over the centuries.

Occupying an important and sacred place in the country’s culture, the zebu, a humped cattle, also constitutes the wealth of its owner. Cattle rustling is common. In some areas, cattle outnumber people two or three to one.

52 percent of the people in Madagascar practice indigenous religions. In particular, the Merina in the highlands hold to the practices and believe the dead join their ancestors who intervene in earth’s events. Taboos known as fady are common. There is a practice of tomb building and the famadihana, a ceremony where ancestors’ remains are removed and re-wrapped.

41 percent of the people are Christian. These are almost divided equally between Catholic and Protestants. Some indigenous practices and traditions are incorporated.

7 percent practice Islam, which was brought to the country in the Middle Ages by traders.